Which PacketCluster Should You Use?

Do you use a PacketCluster which is displaying ONLY spots posted by U.S.A. or NA stations?  I don't.  I use VE7CC which displays spots from all over the world.  There are many other Clusters you can use which do this but I just happen to like VE7CC. 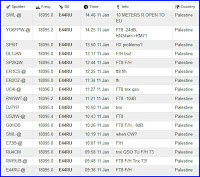 However, seeing this spot alerts me to the fact that there actually is a 9K station operating on 160-M and that is a Band-Point which I need.  If 9K2HS is still there after my Sunset, maybe I'll get a chance to work him.  At least I know he is operating on that band.  And, most importantly, I can be ready for him before anyone in the U.S.A. or NA spots him.  (In this case I did not see 9K2HS show up that day after my Sunset.  But I did work 9K2HN a week later!)

Then, just as the Sun peeked above my horizon - at 1250 GMT I first copied E44RU.  I started calling him at 1253 GMT.  It took me an hour and 23 minutes to finally make the QSO but I did make it running 1,100-watts to a 17-M Inverted-V (no beam.)  And, if you note on the PacketCluster list on the Right, there were ZERO spots from ANY U.S.A. or NA station during that period!  And, while I was trying to work him, I NEVER saw him call or work a U.S.A. or NA station.  Still, he did work me!  I was there calling him because I saw spots from other parts of the world which alerted me to the fact that E44RU was on 17-M FT8 F/H at that time.

Had I been monitoring a PacketCluster which was displaying only spots from U.S.A. or NA stations, I WOULD NEVER HAVE KNOWN E44RU WAS ON-THE-AIR!  As the image at the Right shows, there were NO spots from my part of the world for E44RU during this period - yet, as it turned out, E44RU was indeed definitely workable, in fact I DID work him, and it gave me a New Band-Point for the Challenge!

The end result is that I made the log (see the image on the Left) and scored a New One which I may have totally missed by only watching spots from my part of the world.  Restricting your PacketCluster spots to only those from your area can LIMIT the possibilities for you to work many stations!

This is a "DX Tip and/or Trick" sponsored by the West Virginia DX Association and comes to you FREE with your membership.  Those WVDXA Dues are worth every penny - right?