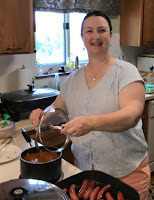 WOWZER!  Another fantastic WVDXA Meeting at the QTH of Frank, KA8SYV, and his wife, Paula.  Their hospitality was "second-to-none" and the food (oh, boy) the food was wonderful.  Several members were over-heard to mention they were attending WeightWatchers but I won't tell if those people exceeded their daily Point Count or not! 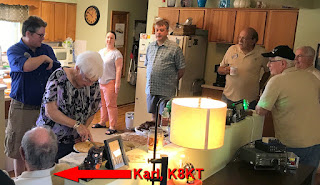 In the photo at the right (click on any photo to see a larger image) you can see Paula at work making the Hot Dogs and the Hot Dog Chili.  In addition there were Hot Dog buns, coleslaw, onions, mustard, ketchup, etc. plus two different versions of baked beans, potato salad, a vegetable and cheese plate, chips and HOT cheese dip, and I'm sure I'm forgetting even more goodies.

I did notice that Karl, K8KT, took a seat right at the end of the massive dessert table.  I didn't think anything about that until it was brought to my attention that when my XYL, Evelyn, was cutting the desserts, any broken or sub-standard pieces from those desserts were hand-fed by her to Karl.  NOW I understand why he took that seat!  You can see where Karl sat in the photo at the left as Evelyn is cutting the apple pie!

The WVDXA gained two New Members at today's event!  Amanda Ritchie, KN4EBF, and Zach Litteral, K8ZDL, both expressed interest in joining the group.  As per our rules (or lack of same) - BANG, ZOOM, they are both now members of the West Virginia DX Association.  You can see the two of them in the photo on the right.

The presentations at today's meeting were nothing short of Top Drawer!  Frank, KA8SYV, was up first with a PowerPoint presentation on the latest WSJT-X suite of digital programs especially featuring the very latest protocol, FT8. Frank's talk held everyone's firm attention and generated a great deal of questions and comments.  I am certain that he really piqued the interest of anyone there who had not already become a user of the FT8 digital mode.  After the meeting, Frank posted to the WVDXA reflector some NINE links that are what any new user of WSJT-X needs as references. 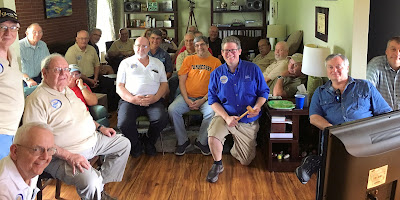 After the PowerPoint presentation, Frank yielded the floor to Hal, W8HC, who gave an extremely interesting "Show and Tell" about his upcoming DX'pedition to 3YØZ, Bouvet Island.  Hal showed off some of the cold weather gear he has had to purchase for this trip.  He let us see his parka, sleeping bag, boots, socks, outer-wear waterproof overalls, etc. and described more of the specialized equipment he will be taking with him on this trip.  He discussed many of the details of this dangerous trip to a most remote part of the planet and gave us several details that most of us probably never thought about.  Hal, W8HC, sincerely thanked the WVDXA for the substantial donation we made to the upcoming Bouvet Island DX'pedition and noted that the expenses were still in need of more funding.  Charlie, N8RR, was on-hand and is taking up another collection of donations for the DX'pedition.  He said he received several donations today.

After Hal's presentation, Frank, KA8SYV, had his radio and computer set up for an on-the-air demonstration of the FT8 digital mode.  Many folks gathered around the HUGE monitor to watch and ask Frank questions. There was much more information exchanged here than one could shake a stick at!  And, to make sure those folks were well-fueled for this information exchange, Paula left the dessert bar OPEN and many took advantage of her generosity.  Home-made apple pie made with WV apples, cakes, brownies of several persuasions, OH, I'm getting a Sugar Rush just typing this! 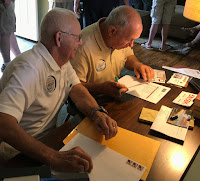 As is many times the case, ALL THREE of the ARRL Card Checkers for West Virginia were in attendance at today's meeting.  You can see in the image at the left, Dave, WA8WV, and Alan, W8OP, pouring over an application and checking the QSL cards.

I should also note that Gene, W8VZ traveled from Moundsville, Alan, W8OP, from Fairmont, Larry, K8YYY, from Shinnston, and Tom, K8TW, from Pickerington (outside Columbus) for this event.  That's a lot of miles but DX is always worth the effort!