The upcoming DX'pedition to Malpelo will use the callsign, HKØNA. They plan to be operational beginning January 22, 2012. The plan is to operate 160-M through 6-M, CW, SSB and Digital. The team consists of 15 operators who will man at least 3 station simultaneously. Equipment will consist of Elecraft K-3's and Elecraft KPA-500 amplifiers and they plan a special emphasis on 6-M including 6-M EME. The main web page is located HERE and you can select the bands and modes where you need Malpelo on THIS web site. Malpelo stands at Number 12 on the 2010 Most Needed Countries List and is about 2,400 miles nearly due South of West Virginia so this should be a chip shot on most bands. 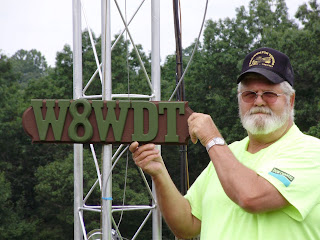 Well, Tim, K8RRT, sure started something! Three days after Tim got his new call, Dwight, KC8WDT, received his new call, W8WDT. This means us old dudes are really going to be stressed trying to remember who everyone is now! At least Dwight kept the same suffix so he should be easier to remember than Tim.

On the right you can see a photo of Dwight's recently improved antenna farm (Click on any photo to see a larger image then use your Browser's BACK button to return to this page.) At the very top is a CushCraft UHF/VHF vertical. Under that is a Cu 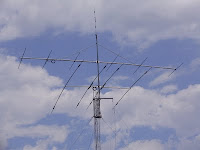 shcraft 617-6B at 45-feet for 6-M and below that a Mosely TA-33 w/WARC element at 40-feet. Also shown is an 80-M Inverted-V. All this is on a Glen Martin Heavy Duty Hazer. The above mentioned antenna heights were chosen by Charlie, N8RR, after analyzing Dwight's location and running that information through the HFTA program. You then need to realize that Dwight's antenna base is at about 1,100 feet elevation. Is it any wonder he works all that 6-M DX when the normal 6-M Big Guns of the WVDXA hear nothing? 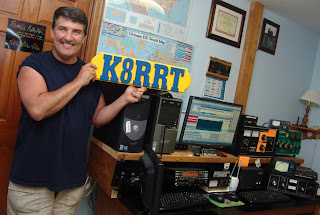 Tim, KC8UHE, recently petitioned the FCC for a change in his callsign. Today the FCC granted that change and awarded Tim the call of K8RRT. Tim had spent a bit of time a couple of weeks ago looking through the list of available calls and when he saw this one, he fell in love with it. After debating about it for awhile he ran it by Charlie, N8RR, who gave him an enthusiastic Thumbs Up! In fact, Charlie told him "I would have dropped that KC8UHE call a long time ago!"

So today, I helped Tim change his log book, canned CW, RTTY and PSK-31 messages, and helped him request a new LoTW Certificate for K8RRT. After we had all that done, Tim proceeded to get on the air just to hear how the called sounded coming back from the DX. First he worked LZ2HQ on 20-M CW in the IARU HF World Championship contest. The Bulgarian station was running 30+ wpm and Tim had to use the amp to crack the EU pileup but he had a solid QSO. The LZ station was booming in so it was a good test of hearing his call come back from the DX. Then Tim moved to 17-M and worked JX5O on CW for an All-Time New One! I guess "K8RRT" does have some magic in it!

Congratulations on the new call Tim. Now us old timers will spend about a year getting used to who K8RRT really is when we hear that call in the pile-ups.