Five operators: AD6E, G3KHZ, K6HFA, CT1AGF, and W5GAI will operate from three islands in Papua New Guinea during October. They have room for one more operator if you want to make the trip. See their web site HERE for more information. They may do 160-M on the trip but since it will cost $1,500 to transport the 160-M amplifier and antennas to that location and back, they are asking for donations via a PayPal link on the above web site to help fund that band. If you don't use PayPal you can send your donation to W5GAI. They plan to operate from these IOTA locations: OC-008, OC-181 (P29VLR), OC-041 (P29NI), and OC-025.

Have you given up trying to work any DX at the bottom of the Sunspot Cycle (except on the low bands?) Do you ever turn the rig to 15-M or 10-M at all? Well, JQ2UOZ set a challenge for himself. The challenge was to try to work DXCC at the bottom of the sunspot cycle running just 500 milliwatts to a dipole antenna on the 17-M band or higher frequencies. He began this quest on November 25, 2006, and as of August 4, 2008, he has reached 100 countries! Nothing short of WOW! Check out his web page HERE and his Challenge stats HERE. Read through some of the stations he worked - it even includes BS7H!

W8QHG's Hint for Pointing Your Antenna

Bob Hall, W8QHG, mentioned to me today that for many years he has used a printed list of "Beam Headings" in order to point his antenna toward the DX. The list he has used for a long time was made in 1980 and called "Beam Buddy." However, it is now drastically outdated in that many country names and prefixes have changed in the last 28 years.

But, Bob recently found a web page that would allow him to print out a current "Beam Heading List" which was customized for his particular location. That web page is one of the "DX Tools" of the North Jersey DX Association. Here is a screen shot of what Bob's list looks like: 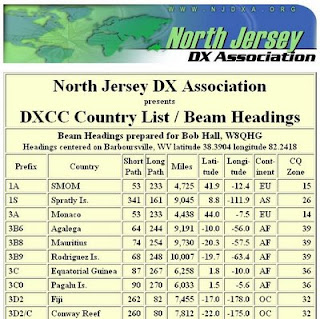 All you need to do is to visit THIS Web Site and enter your information (Name, Callsign, ZIP Code or Latitude/Longitude) and click on the "Generate" button. Shortly the list will be created on your screen and you can use File | Print to print a hard copy for your station.

Thanks to Bob, W8QHG, for sharing this Hint with the WVDXA. If you have a Hint or Kink that you would like to share, contact one of the "Blog Authors" listed on the bottom right-column of this Blog.