At the May 2017 breakfast meeting, the WVDXA voted to send another $100 donation to ClubLog.  That money has been donated under the account of W8AH (the WVDXA Club Callsign.)  It now shows on the ClubLog page as you can see below and will be randomly displayed with other donors after every upload and expedition log search.  ($100 U.S. dollars is £74.6 British Pounds.)  This brings the total donations to Clublog by the WVDXA to $400 since 2013.

We received a nice Thank You email from the creator of Clublog in response to our donation:

Thank you so much! Please do let your members know, once again, how much I appreciate this support from the club. I am delighted to be able to help the West Virginia DX Association with Club Log!


It is interesting to note that TWO other WVDXA members just made individual donations to Clublog within the last three days!  I'm sure there are others but these just happen to show on the same page as the WVDXA donation. 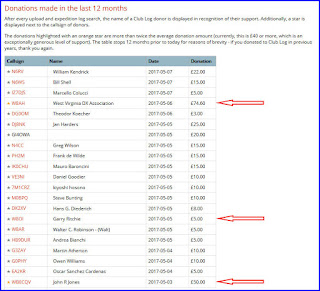 If you have uploaded your log to ClubLog but your call does not appear in the Leagues, it might be that it is "hidden" from the leagues.  This is usually due to being inactive for 12 months or more, but possibly by choice of the callsign's owner.  You can fix that by clicking HERE and following the instructions.

One other benefit of uploading your log regularly to ClubLog is that it provides a backup of the basic QSO information in your log.  If you should lose your computer (AND the backup you ARE making - right?) you can retrieve the basic info from ClubLog.  You will NOT get back things like Comments, Names, Notes, QSL info, etc. but you will get the basic date, time, band, mode, call and QSL status.

Well, for a change, the WVDXA had a breakfast meeting.  Seth, W8FG, suggested that we do this prior to the Hamvention and his suggestion was positively accepted by some 15 members.  We met at 9:00 a.m. at Hardings Family Restaurant at the Mink Shoals Exit of I-79 and everyone stayed for almost 2 hours.

Why most were not smiling might have been because the food had not yet arrived.  Why Mr. Ellis had his eyes closed - I don't know.  Maybe it was one of his short naps?

The group voted to again support Clublog with a $100 donation from the Treasury.  The Treasurer (Dave, WA8WV) immediately tendered to the President (Clark, W8TN) the $100 in CASH!  It's no wonder we made him Treasurer.  W8TN will take care of the Clublog donation.

A small flea market followed in the parking lot with Seth, W8FG, disposing of some surplus cables.  Absolutely NO ONE left hungry!  And, I do believe a good time was had by all!