Back in April a DX'pedition to Western Sahara, SØ4R, hit the airwaves. Standing at No. 86 on the Most Needed Countries List, there was a good deal of interest in working this one. Tim, KC8UHE, displayed a LOT of interest as this would be another all-time New One for him. However, as it sometimes happens, Tim's work schedule got in the way of his working this DX'pedition. On April 14th he posted to the WVDXA Reflector:

As Post after Post to the reflector showed various WVDXA members knocking off SØ4R on many bands and modes, the frustration began to build in Tim. As you may recall, at that time Tim was using a Kenwood TS-480S as his radio. This is essentially just a mobile radio. His did not even have a CW filter in it! Then early on the 15th of April Tim posted this:
But, he did NOT go to bed. At 12:42 a.m. he Posted a message with the following subject:

So, he finally made a QSO with a New One! Outstanding! But, still not wanting to let it go with just one QSO, Tim kept chasing the DX when the 12-hour work days allowed him to be at the radio. He desperately wanted a 160-M QSO and now put all his effort into that. Just before midnight on the 15th Tim Posted:

Did anyone Copy my qso with SØ4R?

He had managed a WA8VPN "possum" contact with SØ4R on 160-M. But, because of the massive QRM to his "mobile" radio, he was not certain the DX copied his full call. He felt the call might not have been correct and he sent his call again with his report only to get a "TU" from the DX. Then, when the online log was updated, his 80-M QSO was there but NOT the 160-M one.

Still not willing to give up Tim asked me for some help. I lent him 500 feet of No. 14 for a Beverage On Ground (BOG) and I lent him my brand-new Elecraft K-3. Tim was ecstatic! He just knew he would get that 160-M QSO now. So, under cover of darkness he ran the BOG out through a neighbor's pasture. I went home and at 12:38 a.m. on the 16th, I copied both sides of Tim's QSO with SØ4R. WONDERFUL! We both were on Cloud 9.

However, the next log update STILL did not have a QSO for KC8UHE on Top Band. RATS! Now the DX'pedition was over. So after a couple of weeks I emailed the QSL manager and told him that I had copied Tim's QSO (both sides) and I had discovered that there was a 160-M QSO in the online log for K8UHE which was not a valid FCC call! I politely suggested that the SØ4R operator may have failed to properly record Tim's call. The manager promptly replied that at the time I reported the QSO, they were NOT on 160-M and the QSO time for K8UHE also did not agree with the same time. He suggested that Tim had worked a Pirate!

Tim was obviously deflated as we both had been certain he had a good QSO. But, following my philosophy of "Never Give Up, Never Surrender" I recently helped Tim send a QSL with all three times he felt he had worked SØ4R on 160-M (along with his 80-M QSO) and we included a brief letter in English and Spanish explaining that K8UHE was not a valid call with the FCC. 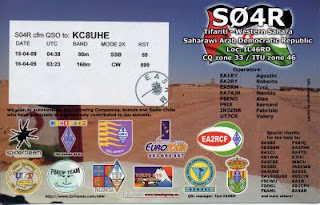 phone. I first thought it was a prank call but eventually I made out the fact that it was Tim. He had just come in from his mailbox and he had received the QSL you see here. (Click on the photo to see a larger image.)

It took a few minutes for me to fully understand what he was screaming into the phone and when I did I asked him to run the QSL by my house on his way to another 12-hour night shift. I am pretty certain that tonight Tim will be wearing a silly grin throughout his entire shift.

BTW, he refers to this as a "Trophy" QSL because of all the effort he went through to get the contact including getting nipped in the rear by a mother horse as he rolled up the BOG at 2 a.m.! So even when it looks the darkest, you need to persevere as sometimes, dreams DO come true!

The following is copied from an email by N8RR on the WVDXA Email Reflector. It details WA8VPN's 40-M QSO with FT5GA on the last night of the DX'pedition. This is how the Big Boys do it, so take notes!

Papa November asked me to summarize the event sequence for his Glorioso CW QSO.

It was known that 7 October was the last day for the FT5GA Dxpedition. WA8VPN was still seeking a CW QSO. Earlier in the day, FT5GA was on 15 and 30 meters CW with a good signal. Papa November and others in WVDXA were trying for a QSO on 15, but Bob was unsuccessful. The band folded and Bob was still without a CW QSO with FT5GA. They were nowhere to be found.

Messages were posted saying some of the antennas were dismounted, but that some stations remained operational. However, late afternoon passed into evening, then late evening, and no FT5GA was heard or seen spotted on DX Cluster. I thought we had seen the end of the FT5GA operation.

Somewhere around 9PM local WA8VPN called me on the phone, and asked if I thought there were any chance FT5GA might make a last minute appearance on 40M CW. I had no idea, but thought the chance was slim. I have been hearing FT5GA on 40M CW previous nights somewhere around the 03z hour, if they have been on. On the previous night October 6 I thought they had a workable signal here. Bob asked if he could come over to my QTH, in case the FT5 showed up for one last hurrah on 40. He wanted to use my station because I have been hearing FT5GA. I invited Bob over.

Around 0200z Bob arrived. I had been listening on all bands and monitoring the cluster, and not a peep was heard from FT5GA. I showed Bob the station, demonstrated the beverages. WA8VPN operated on 80 and 40M working some DX, including TO7RJ and 3B8CF on 40 CW; he knew we had good propagation to the Indian Ocean, and were putting out a good signal into that area.

After about an hour of monitoring the bands, with nothing heard on the radio or Cluster from FT5GA, Bob was just about to pack it in as a lost cause. We both figured the equipment was dismantled and operations ceased with FT5GA. At the last minute, as he was walking out the door, a Cluster spot came up for FT5GA on 7002, sent by some DX outside of North America. Quickly the FT-2000 receiver was tuned to 7002 and zilch was heard. No FT5GA and no pileup.

Some very careful tuning over a 2 minute period revealed a whisp of a signal down deep in the noise on 7002. Yes, it was calling CQ. The call FT5GA was deciphered one time, and then the signal stood by. Bob was in the operating chair, and I thought he might have the big one.

I reached over and set the XIT control for +2 khz and said to Bob: "Call him. You may never hear him again, and this could be the last shot" Bob didn't even wait and listen to see if anyone else heard FT5GA and was calling. He just blind called up 2 khz and sent WA8VPN twice.

The ghost signal on 7002 came back to someone. Bob deciphered a W and an A but that was it. I said: " I think he has come back to you, call him again" Once again, Bob sent WA8VPN twice on 7004. This time, FT5GA came back to a call and sent a report. The signal was so weak and the noise was so high he just could not be 100% sure if the report was for WA8VPN. However, the timing sequence was right throughout, and the response from FT5GA was as expected. Once again, I suggested to Bob that this was probably as good a shot as he would have. I said "send him a report". Bob sent him a 599 three times, then repeated WA8VPN twice.

The ghost signal came back sending something that could not be deciphered because the signal was so weak, but both of us could hear UP. I looked at Bob and he looked at me. I said: "You probably just worked FT5GA, if it was really him"
We listened to the QSX frequency, and there were a couple of callers, but we believe they were attracted by the Cluster spot and zeroed in on WA8VPN's signal. We did not hear FT5GA work anyone else. I don't think he worked anyone prior to Bob's calling him.

Both of us felt pretty good about the sequence of events but we were both skeptical. It was Bob's last shot for this Dxpedition, and he took it. The online log would tell if it were zero or 3 points!

I would trade all of my FT5GA QSO's, with the possible exception of 80M, so that Bob could make this one. Fortunately, that was not necessary. This entire sequence and the unlikely unfolding of it is unique in my 47 years of experience. WA8VPN sure must be living right!

That's the story, and we are sticking to it.