On Saturday, April 11, 2020, the WVDXA held its first "Virtual" club meeting.  With the "Stay at Home" restrictions currently in place plus the "Social Distancing" requirements, it is not possible to get together in person. 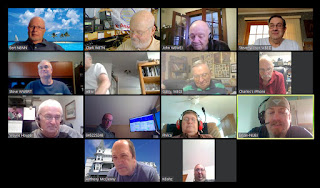 So, by using the Zoom Video Conferencing application, the club had a wonderful meeting in cyberspace!  A total of 14 WVDXA members showed up (literally, "showed up") and everyone could see and hear everyone else.  Plus, as a nice benefit, we had members from many states away who normally do not make it to a regular WVDXA meeting.

Out-of-state members who participated were: N8NN who joined the meeting from Florida (you can see the palm trees behind him in the screenshot above), WV4TN from Tennessee, W8UV from Delaware, and W3UR from Maryland (sitting outside in front of his Grand Mansion.)  Also, we got to see John, W8WEJ, from Vienna, WV, who has not made it to a meeting for many years.  And, relatively new members Bryan, NU8J, and Steve, WB8III, were there as well.

In addition to the above named members, we also had W8TN, WW8RT, W8IW, W8OI, N8RR, WT8V and K8OHZ.  Quite a diverse turnout.  Click on the photo on the right for a screenshot taken during the meeting.

Surprise visitors included W8OI's better half, Nancy, and W8UV's "keeper", Karen.  Plus, one of N8RR's furry felines showed up briefly as well.

Two of the attendees connected by cell phone and the rest from laptops or desktop computers.  The meeting went off with nary a hitch, just one or two very minor issues that were quickly resolved.  The only negative was we were not meeting at a place where food was served!  That's normally a mainstay of our meetings so I for one missed that!