Back in March, Garry, W8OI, collected donations from WVDXA members for the EP2A DX'pedition to Iran which occurred from April 15 - 25, 2016.  In total, 23 club members donated a total of $645 to this DX'pedition.  This is almost EXACTLY our average contribution to any DX'pedition.  However, it happens that out of 19 Club and Association donors to this DX'pedition, we were the SECOND largest donor, just behind the Northern California DX Foundation!

Below is a scan of the Certificate we received from the DX'pedition this week.  Also, we received two DVD's of their DX'pedition.  Anyone who wants to view that, just contact W8TN.  You can click on the photo below to see a larger image. 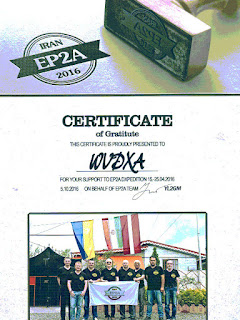 As of our most recent contribution to Bouvet, 3YØZ, the WVDXA has donated to 21 DX'pedition's and three times to Clublog for a total of nearly $15,000!  Pretty cool for a tiny bunch of mostly retired hams.  I'm definitely impressed!