In response to a request from the Ministry of Communications and Transport of Bosnia and Herzegovina in August, the International Telecommunication Union (ITU) withdrew the call sign prefix allocation T9A-T9Z for Bosnia and Herzegovina and made a new allocation, E7A-E7Z. The change was made initially on a provisional basis under authority of the ITU Secretary-General and was confirmed by the 2007 World Radiocommunication Conference to be effective November 17, 2007.

A DX'pedition this coming week from Jersey Island is planned by 3 French and 1 Scottish amateurs. They plan to concentrate on the low bands, 12, 17 & 30-M as well as RTTY. There will be three HF stations so you have a good chance of working this one to fill in some of those band-blanks in your Challenge effort. Please do not mix your QSO's on the same card but QSL each operator independently as per the instructions on the web site.

The ARRL has completed the finishing touches on certificates issued through the 5-Band DXCC (DX Century Club) and VUCC (VHF/UHF Century Club) programs. The awards program staff worked with the ARRL in-house graphic designers to create a fresh new look for these traditional awards.

The new 5-Band DXCC certificate recognizes the achievement of this award with a distinctive graphic display that incorporates the ARRL diamond and globe design that is familiar throughout the DXCC program, as well as stunning raised gold leaf enhancement; when framed and hung in your shack, it will definitely mark your accomplishment. The new VUCC award is a full color diploma that features red, white and blue shading over a grid square map with a stylish VUCC logo.

The ARRL DXCC Desk is pleased to announce the addition of St Barthelemy (FJ) to the DXCC List, making the island entity number 338 with an effective date of 14 December, 2007. Cards with contacts dated December 14, 2007 or after will be accepted for DXCC credit. New card submissions for St Barthelemy will not be accepted until January 1, 2008 in order to allow time for administrative adjustments.

Bernie, W8UR, is reporting in The Daily DX that we have a NEW entity on the DXCC list as of today. Basically France changed the status of FJ, Saint Barthelemy, which previously counted as FJ, FS - Saint Martin. Now it appears that FJ and FS will be separate countries and we have a NEW one!

As you probably guessed, Martii, OH2BH, and Olli, OHØXX, have traveled to Saint Barthelemy and should begin operation today around 1600 GMT as FJ/OH2AM. Initial operations will be on 20-M SSB and 17-M CW to give as many as possible a NEW counter for Christmas! (And you thought Santa was only putting a piece of coal in your stocking this year!) DX IS!

Dave, W8UI, reports that there is a new 6-M Beacon operational in Portugal. The beacon sends: V V V DE CS1RLA/B QTH IM57px followed by 15 seconds of carrier and 5 seconds of silence. The frequency is 50.076 MHz and it is located 57 miles due South of Lisbon. This might be a good indicator of European 6-M openings. Come on Sunspots!

Has the Next Solar Cycle Begun?

Woo, Hoo! The folks in the Solar Physics community are all buzzing this week (and so are the hams!) about the activity on the Sun this week. On December 11th a region appeared on the sun that is high in latitude and has "reversed" magnetic polarity. These two conditions (of a sunspot) are what signals the beginning of a new Solar Cycle. The only thing that is keeping the scientists from announcing that this is the beginning of Cycle 24 is that this is just a "region" that "may" turn into a sunspot. If it does, then we can all start to hope for better propagation sooner rather than later. 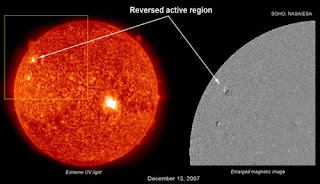 Don't forget that this weekend is the ARRL 10-M Contest. 48-hours from 0000 Saturday to 2350 Sunday (operate no more than 36 hours.) Rules can be found HERE and remember this contest allows BOTH CW and SSB. Solar flux is up to a whopping 78 so there might actually be some 10-M propagation. GL to all.

Bernie, W3UR, reports in The Daily DX that N1UR is planning a DX'pedition with his wife, KB1PQN, to the Spratley Islands in March (22-30.) They will have two 100-watt rigs, no amps and verticals. This is a very hard one to work so mark this on your calendar.

If you don't already subscribe to The Daily DX, you might think about doing so. I find it chock full of useful DX information. You can get a 2 weeks of The Daily DX for free HERE.