Five operators, three from the TX4T operation from French Polynesia last February, will operate for 2 weeks beginning January 20, 2012, from Pitcairn Island.  In the 2010 Most Needed Countries List, Pitcairn ranked 54th.  There is a bit of a discrepancy in the times they plan to be operational.  In the "Plans" section of their web site they mention spending NINE full days on the island.  They also give the dates of 1/20 to 2/4 which is 16 days.  So, Work 'Em Early and Often!
You can view their web site HERE.  They will be running FOUR Elecraft K-3's and four amplifiers including an Alpha 76A.  Look for them to have decent signals here in WV, just 5400 miles away on a heading of 223° or so.
They plan to upload their logs regularly to LoTW DURING the operation if possible using a satellite phone.  If that is not possible, they will upload the full log to LoTW at the end of the DX'pedition.  They also plan to upload to Clublog several times a day.
Interesting is the fact that this DX'pedition to Pitcairn Island will be taking place at the exact same time as the one to Malpelo, which is ranked 12th on the most needed list.  I predict the bands will be HOT with RF during this period! 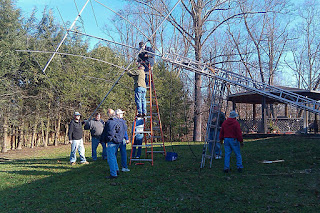 Well, the WVDXA undertook another antenna/tower project today but this time it was a "removal" rather than an "installation" project.  Hal, W8HC, put out an email on the WVDXA Reflector on Thursday asking for help in taking down his telescoping tower and the HF and 6-M beams on top of it.  He knew this was a last minute request but since the weather looked good for Saturday and since the house was being sold, he needed to get the hardware down quickly.  The response, as usual, was great!  NINE WVDXA Members showed up to assist Hal.  This was outstanding due to the fact that a previous antenna job at the same site did not end well with the tower getting away from the crew.  At that unfortunate event, Garry, W8OI, was nearly hammered into the back yard.  We suspect that when Hal put out this email on Thursday, Garry packed up his motorhome and headed South!  Actually that is not true but just a fortunate coincidence that Garry left town just hours before Hal posted his request.
So, with the promise of Gino's biscuits and hot coffee, the crew, consisting of Dave, W8IW, Dave, WA8WV, Charlie, N8RR, Eric, K8OHZ, Pete, K4OM, Lonnie, WA8ZDL, Clark, W8TN and  Rich, K8VE, all arrived and began the process.  Rick, W8ZT, arrived a bit later due to the fact that he brought everything but the kitchen sink!

With Hal, W8HC, and Dave, W8IW, on the roof, the rest of the crew man-handled the tower from vertical to horizontal without so much as scratching a single element.  If you think it is easy for 7 guys to grab ahold of a vertical tower at the same time, think again!  Several feet were stepped on but the process went smoothly.  With the tower laid over it was relatively easy to remove the antennas, mast and rotor using an old hacksaw, and brute force.  Notice I said "relatively."  It could have been done much quicker with a good bolt-cutter!  Nevertheless, the antennas were soon on the ground along with the tower.
Hal graciously handed over his VISA card to Pete, K4OM, and Pete took Eric, K8OHZ, Charlie, N8RR, and Clark, W8TN to partake of the utopian wonder of Waffle House.  We were saddened to not be joined by Dave, WA8WV, and the rest of the crew but maybe next time.
Garry, W8OI, - you dodged a bullet!  We hope you and Nancy enjoy the sunshine state.  We'll keep the DX warm for you here.  Oh, and Pete must have misplaced Hal's VISA card so Dave, you really didn't miss anything there!