On Friday, October 21, 2011, Charlie, N8RR, called for a WVDXA Antenna Raising Party in order to install a new BIG GUN 20-M beam for Bart, WT8V. Charlie and Bart had been working on this project for about 3 months. Bart wanted to drastically improve his 20-M signal from the Mosely PRO 57-B he currently has at 65-feet on a Rohn 25G tower beside his house. After running many iterations of Bart's QTH through the HFTA software, Charlie determined a good location for the new antenna to be about 700-feet from Bart's current tower. 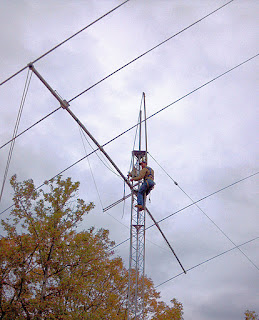 The antenna chosen for this project was an M2 20M5LGS which is a 5-L 20-M Monobander on a 50-foot boom. It was to be mounted on a 40-foot stick of Rohn 55G (the height being computer determined by HFTA) and turned with an M2 OR2800 Orion rotor and fed through 1/2-inch Andrew Heliax®.

At 7:45 a.m. the "Crew" assembled at Hardings Restaurant for a substantial breakfast but the restaurant was not open until 8 a.m. As soon as we had fueled up, it was on to Bart's hilltop QTH to begin the antenna raising. The "Crew" consisted of: Bart, WT8V, Charlie, N8RR, Dave, WA8WV, Garry, W8OI, Clark, W8TN, Tim, K8RRT, Dave, W8IW, Mike, NU8LL, Bob, WA8VPN, Eric, K8OHZ, Benny, WD8CCC and Rick, K8LUP.

A LOT of work was done, problems were overcome and great comradarie was enjoyed by all. Lessons were shared, techniques were passed on, and DX was discussed at length. Bart's wife, Sue, prepared a delicious lunch for all to help re-fuel the effort. The only thing that was not great was the weather. It was cool and damp but at least the wind which normally howls along Bart's ridge-top, stayed away. We finally saw a glimmer of sunlight just at the antenna was secured to the top of the tower. The last folks left at 8:30 p.m. (well after dark) and Bart had to do another 4 hours of tower work and 3 hours of ground work to complete the process on Saturday.

Of course he HAD to get on the radio as soon as the antenna was up and the early reports were nothing short of phenomenal! Bart says the new antenna is at least THREE S-units better on receive. While in QSO with G3YPZ, Bart was told "your mono-bander is 5 S-units better than your tri-bander!” Charlie, N8RR, says that the new antenna should only be about 1/2 S-unit (2.6 to 3.74 db) better based upon the gain of the two antennas and that the extra improvement is due solely to the terrain enhancement caused by the new location he found by analyzing Bart's QTH with the HFTA software.

I have posted some 27 photos of the day's work taken by Garry, W8OI, on a Picasa web album. You can view all WT8V Antenna Party Photos by clicking HERE. Just above the first photo on that page is a link called "Slideshow" which will run through all the photos and you can control the time spent on each picture.

Listen for Bart in the pileups - but you'll have to listen fast as he won't be calling long before he makes the QSO!