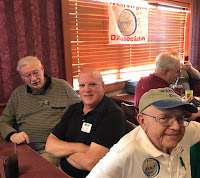 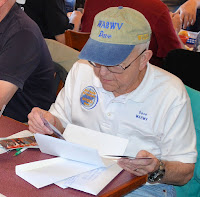 That's a BIG meeting for us!  We certainly stretched the new venue (Ryan's) to near its limit.  I suspect the great turnout was due to Hal, W8HC, giving his presentation “VP6R Pitcairn Island 2019 DXpedition” which included many beautiful photos and videos of the trip along with Hal's commentary.

Speaking of the presentation, I have received MULTIPLE comments about how much folks enjoyed it.  Hal, W8HC, gave us a great insight into how a major DX'pedition requires WAY more work than many realize.  A fantastic element of his presentation was the history lesson about how Pitcairn Island came to be settled.  I can tell you the audience was "riveted" to the screen during this presentation as evidenced by the photo on the left.

As a large benefit of our getting together, we almost always have at least one ARRL Card Checker attend since ALL THREE ARRL Card Checkers in WV are members of the WVDXA. And, in fact, this meeting did see all three (W8HC, WA8WV, and W8OP) attend.  I don't know if Alan, W8OP, or Hal, W8HC, checked any cards, but I know that Dave, WA8WV, (seen in the bottom right of the above photo) was kept busy checking cards. A shot of him (and his Green pen) actually checking cards is shown on the left.  Click on any photo to see a larger image. 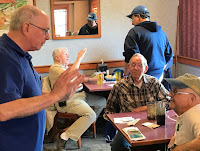 In fact, Dave made one WVDXA member VERY happy by checking his QSL Submission!  Tim, K8RRT, gave Dave his application and those confirmations put Tim over the 2,000 level on the DXCC Challenge!  You can imagine how happy this made Tim.  And, just to be able to attend this meeting, Tim had to get a workmate to fill in for him so that he could leave work early for the meeting.  Plus, Dave checked a few QSL's for Charlie, N8RR, leaving him needing only THREE MORE confirmations to reach the 3,000 Challenge level!

Those who attended the meeting came from all across the state with several attending from the Far North Enclave of the WVDXA: Wayne, KB8KIM, came from Randolph County, Bill, K8WEE, came from Summers County, Steve, WB8III, and Alan, W8OP, came from Fairmont in Marion county.  In addition, several came from other states: Jack, N8DX, came from just north of Cincinnati, Ohio, Harry, N4HT, again came from Lexington, Kentucky, for his second WVDXA meeting and he brought his friend, Bill, WE5P, also from the Lexington, Kentucky, area for his FIRST WVDXA meeting!  You can see Harry, N4HT, and Bill, WE5P, in the top photo above with N4HT on the left. 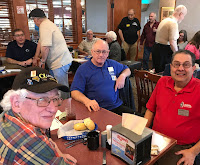 Back to the presentation, this was the first time we used the Laptop Projector which was secured for us by Steve, WW8RT.  It has always been a hassle to try and find someone to bring a projector from their work so we can use it.  Now, thanks to Steve, the WVDXA now has its OWN projector!  THANK YOU, Steve!

Who knew that hams used their hands so much when speaking?  As you can see on the left, Alan, W8OP, in the foreground and Dave, W8IW, in the background made extensive use of their hands in their conversations.

And, some were so excited to be here that they had that "deer in the headlights" look.  Steve, WB8III, in the red shirt on the right seemed to always look surprised in any of the photos that Hal, W8HC, and I took.  I just assume that was his excitement at being able to participate in a WVDXA meeting!

Finally, the group voted to make another of our annual contributions to support Club Log.  This is the SIXTH time the WVDXA has made a financial contribution to Club Log.

In the end, everyone left the meeting having satisfied (for a brief time) their desire to talk about DX.  Another extremely successful WVDXA meeting, for sure!