The Announced DX Operations (ADXO) web page of Bill, NG3K, has added a new feature. On any "current" DX'pedition, there is now a link (underneath the DX'pedition Callsign) that will show PacketCluster spots for that operation. This gives you a quick and easy way to see if the operation has come on the air along with who is hearing it and on what bands. So as to not lose your place on the ADXO web page, right-click on the spot and choose "Open Link in New Tab" if you are using Mozilla Firefox or choose "Open in New Window" if you are using Internet Explorer. TNX to the Ohio/Penn DX Bulletin for this info.

A highlight of this season in the Huntington area is the annual Spring Festival at Heritage Farm Museum. If you've been there before, you know what I mean. If you haven't, why haven't you? This is one of the premier farm museums in the nation and it comes more alive during Spring Festival than at any other time of the year as scores of volunteers show up to demonstrate how the old relics were used. And there are thousands of those historic inventions on display at this great museum. Most people don't realize that West Virginia has such a huge, unique working display.

It's a one day event, the first Saturday in May. May 3 this year.

And if you are a CW operator, the Heritage Farm Museum needs YOU! All day long, from 10 to 4, there will be a demonstration of telegraphy. If you're willing to help in that demonstration, you get into the festival for free. Contact Judy Taylor, WD8EOP, at least a couple days in advance so she can put your name on the list for free admission as a volunteer. Email her at bdsjudy@wvdsl.net or call her at 304-523-0486. Contact her or me if you need more details.

I plan to be there from 10 until about 1. Judy especially needs CW ops in the afternoon from 1 to 4. I can tell you that this will be a bunch of fun.

My old SB-220 wasn’t putting out as much power as it once did. It had to mean that the original Eimac 3-500Z tubes in it were getting weak, right? I was sure of it.

I told Dave Ellis, WA8WV, that I was going to have to buy a matched pair of new tubes for a total of more than $350 including shipping. Dave advised me to try a good set of borrowed tubes first; just to be sure I needed new tubes. He told me that an old Drake linear, which he had recently donated to the Museum of Radio and Technology in Huntington WV, contained two perfectly good 3-500Z tubes. He said “why don’t you borrow those tubes and see if they fix the problem before spending a lot of money.” Great idea, I thought.

So I got Dave’s old tubes and installed them into my linear expecting a big improvement in power output. I was surprised to discover that the output was about the same. Both sets of tubes resulted in only about 500 watts output on 10 and 15 meters and only about 700 on 20. I was flabbergasted as I returned Dave’s old 3-500Z’s to the Drake in the radio museum, figuring that those relics weren’t really as good as Dave had remembered.

I told this story to lots of people including one of the smartest RF engineers I know, Earl Walton, W8LBN. Earl said, “What’s the difference, that’s all the power you need to run anyway?” Earl is obviously not a DXer.

Yeah, most of the time that is enough power, but not when you’re in a pile up trying to work a BS7 or a P5 competing with WA8WV, WA8VPN, W8GG, W8QHG, W8HC, W8UV and W8WEJ (the WVDXA Top of Honor Rollers) and thousands of other DXers around the globe. At that point I want every legal watt I can stuff into my antenna.

Earl agreed that there wasn’t much else in the circuit that could affect power output so I decided to act. I spent the money and got those new 3-500Z’s. I even paid for two day shipping from California. Actually they are 3-500ZG’s, with the “G” meaning graphite for added durability in these new Thompson tubes (made in China). I was going to be a powerhouse again on the air.

I installed the new tubes. I followed the instructions completely, applying filament power only at first, letting the tubes “cook” as they glowed for twelve solid hours before turning on the drive. Then I slowly sneaked the exciter’s power up gradually and read the SB-220’s output as it climbed to 200 watts, then 300, 400, 500, 510. I cranked up the exciter more. There was no further increase in output. The maximum I could get was 510 watts on 15 meters. I tried 10 meters and got 500 watts. I switched to 20 meters and got 700 watts. Yes, I had the same results that my old tubes had produced, and the same as the tubes I had borrowed from the museum. Nothing more.

Several more days passed before I finally figured it out. I was driving the linear with my Yaesu FT-1000MP Mark-V, and I found the answer in the Yaesu’s operating manual. I learned that most very old linears were designed with a different kind of ALC feedback than is required by most modern transceivers. So I unhooked the ALC line, and voila! Eureka! The big power was back! I had pretty close to legal limit power on all bands again.

Earl and Dave assumed that I knew not to use an ALC line between two pieces of equipment designed half a century apart in time. It’s their fault. They thought I was smarter than I am.

My problem dated back to last fall when I changed my connecting ALC line because I found a loose plug on the old line that I had been using ever since I got the Yaesu rig. Looking back now I believe the old line’s faulty plug wasn’t making proper connection, so it was not carrying any ALC feedback and thus was not cutting back my exciter’s power. When I installed the new ALC line, which worked, it caused the exciter to cut back because of the incompatibility of the SB-220’s ALC to my modern transceiver. Some time passed after installing the new ALC line before I tried to crank up the power so I didn’t see the relationship.

Oh well. I now have a perfectly good set of backup 3-500Z’s in case one of these should ever fail when I finally hear that VK0 that I still need.

Addendum by W8TN: Bob, W8QHG, after hearing about Garry's troubles told me, "Well, if Garry had just told ME about his problem, I would have told him to check the ALC!" You see, back when Bob built his SB-220, he ran into the same problem of low output. A call to Heathkit quickly set him on the right path and disconnecting the ALC yielded full power output. So, in retrospect, Garry probably should have posted his trouble to the WVDXA Reflector to utilize ALL (not just some) of the accumulated brain power in the club. Sorry for your trouble Garry but this Post should help others in the future. Thanks for telling your story!

Last night's WVDXA Meeting at the Museum of Radio and Technology was another stellar affair! Garry, W8OI, gave a presentation about the last radio transmission from the Titanic which included an actual recording of the spark signal as received at a Marconi shore-based station in New Jersey in 1912! That gave a lot of us cold chills! Also, Hal, W8HC, had a pair of special guests, Joe, 4X6KJ, and his wife, Ruth, 4X4CM, who are visiting West Virginia for the first time. Here are a pair of shots showing W8OI sending "SOS" with a spark transmitter and 4X6KJ answering many questions about Amateur Radio in Israel. 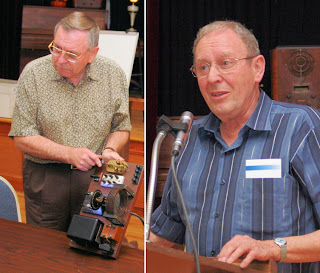 Hal, W8HC, had earlier in the day picked up a Proclamation from West Virginia Governor, Joe Manchin, making 4X6KJ an Honorary Mountaineer! 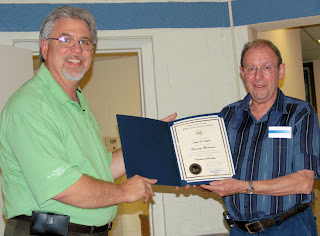 Attendance was a whopping 22 including a couple of new faces - Bob, W8GU, from Charleston and Matt, AA8P, from Ashland, KY. Also, Jerry, K8OQL, drove all the way from Romney in the Eastern Panhandle to attend! With the sheet cake Hal brought and Evelyn's famous mint Brownies, no one left hungry!

I've posted the actual SOS (CQD) of the Titanic at the following location as an MP3 file.

Titanic SOS
Here is what is being transmitted:

Team Leader, Didier, F5OGL, announced that the DX'pedition to Glorioso Islands, FR/G, which had been scheduled for May has now been delayed until sometime this fall - possibly the end of September or beginning of October. Currently some anti-cyclonic shelters are being built on the island and it has been decided to not attempt the DX'pedition until that construction is finished. You can view the 2008 FR/G web site HERE and watch for future updates.

"We saw a string of zero-sunspot days over the past couple of weeks, but this week saw a brief but significant sunspot that lasted only a couple of days. Sunspot 990 emerged as a tiny speck over April 14-15, but it was definitely a Solar Cycle 24 spot. Not only was the polarity of this region correct for the new Cycle, but it was far north above the Sun's equator, which is what we expect for a sunspot from an emerging solar cycle. The only previous Cycle 24 activity was close to the solar equator."

Jeff, KZ8E, reports that the National Institute of Amateur Radio in India has announced on their WEB PAGE the Silver Jubilee Celebration of NIAR for October 24 through November 3, 2008. They mention on that page that they will assist guests in regard to reciprocal licenses or operation permits for VU4 or VU7. So, mark you calendars as many need these countries and we could even have some propagation by then. Thanks, Jeff.