WVDXA at the Dayton Hamvention - 2013

This was a "Banner" year for the WVDXA at the Dayton Hamvention.  Rick, W8ZT, had a large banner for the WVDXA printed and he placed it on the windshield of his car in his extraordinary Flea Market space.  For those who have not been there, Rick's space is on an "end cap" on one of the aisles right next to the Hara Arena main building.  It is also close enough to a food vendor and the beer vendor that you can walk there in less than 30 seconds!  That means this banner is in a place to be seen by nearly every person who enters the Flea Market at the Silver Arena side of Hara.  Rick, as always, had plenty of chairs, drinks and space for the WVDXA guys and their friends to hang out.

In addition to having such a wonderful space that he makes available to the WVDXA, Rick added the name of the WVDXA to his Flea Market spaces with the Hamvention Committee.  That means the WVDXA will always have those spaces in the event Rick is not able to attend.  Thanks to Rick's generosity, the WVDXA will have a PRIME location at the Hamvention for as long as we want it.
Many folks showed up to take advantage of Rick's hospitality as well as to just stop for a minute and chat.  We probably should have had a sign-in sheet!  Dave, K8MN, who was not able to attend this year, had some of his "spies" send him the photo of the WVDXA banner above and the shot of Seth, W8FG, and Dave,W8HYX, manning Rick's booth.
At the DX Dinner, the WVDXA gathered 9 of our members in the lobby of the Marriott Hotel and made a formal presentation of our $1,000 donation to the Amsterdam Island, FT5ZM, DX'pedition (see photo below - click on any photo to make it larger.)  You can visit the Sponsors page of the FT5ZM web site HERE and click on the "Club and Organization Sponsors" link to see the WVDXA logo.  One of the leaders of that DX'pedition, Bob Allphin, K4UEE,(he is in the dark coat to the left of Garry, W8OI) made a very gracious speech about our contribution.  He noted that our "per-capita" donation was among the largest they have seen.  Thus, considering the size of our group, we were quite generous and he truly appreciated how deeply the WVDXA dug into their savings to help fund this operation.  Bob, by the way, has visited 120 DXCC entities and operated from 69.  He has participated in 37 DX'peditdions and NINE of those were from entities listed in the Top Ten Most Needed.  FT5ZM with be his TENTH from a Top Ten Most Needed Entity!  In addition, the operators who are signed on to the FT5ZM trip are nothing but the "cream of the crop" of DX'ers so whenever it's possible to work them, those guys will pull your signal out of the noise.

In addition to the 9 members of the WVDXA who were present, there were 9 members of the FT5ZM operation there to accept our donation.  The WVDXA actually had more members present but some failed to put themselves in the photo.  Hunter, KD8SZF, and Mike, N8WC, were in the lobby watching the presentation but not in front of the camera.  They must be camera shy!

At the DX Dinner, the WVDXA table was directly beside the NH8S Swains Island tables.  Hal, W8HC, and Clark, W8TN, were seated with the Swains Island crew instead of the WVDXA this year because they were both on that DX'pedition.  When it came time for the SouthWest Ohio DX Association (SWODXA) to announce the DX'pedition of the Year, it came as quite a surprise (to me at least) that the NH8S operation was selected.  You can see on the left a photo of the award.  At a breakfast the next morning, the NH8S team leaders presented each of the members of the DX'pedition with a similar plaque for their own.  WOW!
Even though there was some rain during the Hamvention, this turned out to be a very nice one. It was the 44th consecutive Hamvention I have attended and the second for Charlie, N8RR.  Charlie even got his photo on the ARRL web page in the first picture in the Saturday Roundup HERE.  Tim, K8RRT, Steve, KC8FVE, and Clark, W8TN, were judiciously cropped out of that photo - Hi! 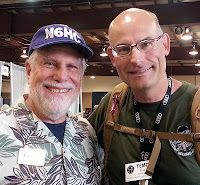 One of the things I heard comments about from several folks was the ability to talk to people they have worked on the air but seldom (if every) have a chance to see in person.  As a case in point, to the right is a photo of Arnie, N6HC, talking to Eric, T6MO.  Tim, K8RRT, was especially pleased to talk to Eric because Tim had chased him for well over a year before he finally managed a QSO just days before Eric returned to the U.S.  Tim also managed to grab Charlie, N8RR, and bring him to see Eric.  Charlie has the distinction of being No. 1 on the Leaderboard for T6MO in ALL of North America.  Charlie worked Eric on 8 band slots and the guy in second place (W1JR) only manged 7 band slots.  I can certainly see this would have been an historic face-to-face QSO.
So, the Hamvention is done for 2013.  I hope all those who managed to attend had a marvelous time.