Kosovo will declare independence on Sunday amid growing excitement among its ethnic Albanians, anger from its Serbs, and the launch of an EU mission to ease the birth of the world's newest state.

"Tomorrow will be a day of calm, of understanding and of state engagements for the implementation of the will of the citizens of Kosovo," Prime Minister Hashim Thaci said Saturday in reference to the breakaway ethnic Albanian majority.

Expectations of a Sunday declaration of independence have been running high for several days -- but Thaci's comments marked the first top-level confirmation that the long-awaited break with Serbia would come this weekend.

By nightfall Saturday, tens of thousands of cheering Kosovars poured into downtown Pristina, filled with anticipation, as convoys of vehicles zipped through the streets, cheerfully honking their horns and waving Albanian, British, German, NATO and US flags.

Talking to reporters after a meeting with religious leaders, Thaci appealed for celebrations to unfold with "dignity ... on the day of the declaration of independence, on the big day, on the historic day ... a day of thanksgiving for a sovereign and independent Kosovo."

Serbia, which sees Kosovo as the cradle of Serb culture and religion, and Russia, Belgrade's main ally on the world stage, has vowed never to recognize an independent Kosovo.

In a television interview later Saturday, Thaci said details of the declaration of independence -- "in coordination with our international partners" -- would be finalized first thing Sunday morning.

"The constitution is ready and national symbols are ready," he said, indicating as well that the newborn state would move quickly to apply to join the United Nations and other international institutions.

Independence is expected to be declared at around 3:00 pm (1400 GMT) on Sunday to the strains of "Ode to Joy," the anthem of the European Union, according to local news media. Street parties and fireworks would follow.

The European Union launched earlier Saturday a 2,000-member police and judicial mission to help facilitate Kosovo's transition to independence -- even as the bloc's 27 members remain split on how to recognize the new state.

In the divided northern city of Kosovoska Mitrovica, a potential flashpoint for violence on Sunday, Kosovo Serb leader Milan Ivanovic rejected the EU mission, vowing it would be boycotted by his people.

"The EU mission is not welcome. We will boycott it and use all methods of civic resistance," Ivanovic said. Serbs make up 120,000 of Kosovo's 1.8 million people and they want to stay part of Serbia.

In the wintery streets of Pristina, many shopkeepers Saturday festooned their windows with the Albanian flag -- a black eagle on a red background -- sometimes alongside banners boasting 50-percent-off sales.

Colourful posters expressed thanks to the United States, Britain and the European Union for supporting independence. Street stalls added "Proud to be Kosovar" T-shirts to their usual inventory of cigarettes and mobile phones.

Thaci's government has reportedly ordered 80 tonnes of fireworks from Bulgaria for the occasion, while a trendy bakery called Fellini's is baking a jumbo Kosovo-shaped independence cake.

EU foreign ministers will meet in Brussels on Monday to try to draw up a "common platform" in response to Kosovo's expected independence, one which does not include the notion of the bloc as a whole recognising the new state.

EU leaders committed in December to help with a settlement on Kosovo's final status, including economic and political assistance and by offering Kosovo the prospect of EU membership some time in the distant future.

"We are working with our international partners in the European Union and the United Nations to bring the Kosovo status process rapidly to completion," a British foreign ministry spokesman in London said.

But some countries will refuse, at least in the short term, to recognise the new state, including Bulgaria, Cyprus, Greece, Romania, Slovakia and Spain.

Opponents of independence fear it could serve as a precedent for other separatist groups in Europe, as well as undermine Balkan security which remains fragile after the violent breakup of Yugoslavia in the early 1990s.

In Belgrade on Saturday, more than 1,000 Serb nationalists -- chanting "Kosovo is the heart of Serbia" and waving the Serbian tricolour flag -- protested against Western support for Kosovo's independence.

Staying On Top of the DX Ladder

Gregg, W8GG, and Clark, W8TN, have been posting to the WVDXA Reflector about their successes in working the VP6DX - Ducie Island DX'pedition. However, without any fanfare, the elder statesman of the WVDXA, Bob, W8QHG, is keeping pace and probably staying ahead of a lot of the club. Bob got up at 5 a.m. this morning and snagged VP6DX on 20-M, 40-M and 75-M SSB! Then, just for good measure, he made a contact with TI9KK - Cocos Island on 20-M SSB on his FIRST CALL! 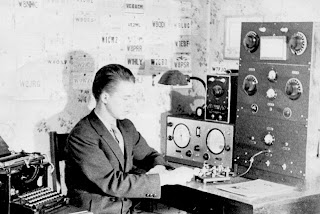 Always dapper, here is Bob at his station in 1937. For those without access to a calculator, that's SEVENTY YEARS AGO! And, he's STILL workin' the DX with as much enjoyment as he had then. When I talked to him this afternoon, he was pursuing VP6DX on 17-M CW. GO, Bob, GO!

The TI9KK DX'pedition to Cocos Island is now On-the-Air. Scheduled departure date is February 14th so you better jump on this one fast if you need it. Planned operation is 160-M through 6-M. With 7 rigs and 4 amps, they should be on multiple bands. This country ranks 72nd on the Top 100 Needed List and it is really close to us so you should fill up your bands list with this one.

Papa November will surely be exchanging Opossum recipes with Yamini, VU2YAM, who is one of the operators. HERE is the DX'pedition's web site.

The first meeting of the year was held at W8TN qth. There was a good turn out. It was great to see all the DXERS and share some trade secrets with each other. The DVD of BS7H was shown and it was interesting to see what they went through to give us a contact and also seeing W8TN in the Log on the video.
Clark, showed some new software that was very exciting to see and the thoughts of how it could be used gave me chills.
We missed everyone who couldn't make it. Hope to catch you all at the next WVDXA Club meeting.

The operators for the upcoming Ducie Island operation are in Papeete, French Polynesia, and will leave today for Mangreva Atoll where they will board their ship, the M/V Braveheart and depart for Ducie Island later today. The trip is expected to take 72 hours with a stop at Pitcairn Island during the night to offload some supplies for the people there. The Braveheart will begin offloading the operators and equipment on Ducie at first light on Saturday, February 9. They will then begin to set up all SEVEN stations before beginning operations simultaneously at approximately 0400 GMT on February 12th.

On the low bands (especially 160-M) they will try to work Europe during the early night hours asking NA stations to "check back later." About 0730 they expect to begin working NA in full force so you can plan on some late nights to work this operation. They WILL operate in the 160-M SSB contest on February 23/24.

Be sure to check out their web page HERE for the latest news and the online log which should be updated twice a day.