Now that Tim, KC8UHE, has received his DXCC Award, he decided that a new QSL was in order. So, he emailed a photo to Gennady, UX5UO, and a few weeks later, Tim had a nice photo QSL card to send to all those DX contacts he plans to make in the future. Here is the finished product: 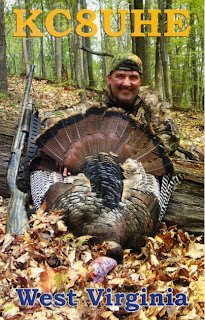 So, if you want one of these exquisite QSL's for your own collection, you need to work Tim on the air. I'm sure he will be on 6-M a lot this summer and 160-M this fall so he'll be easy to find.

"FR/G - The long-awaited DXpedition to Glorioso (AF-011) is now expected
to take place in July. Three or four military radio amateurs,
along with two film-makers from the Defence Press Service, will be
on the island on 9-28 July. The team (including F5PRU, F5IRO,
F5TLN, and maybe F4EGS or F5RQQ) will be active with three
stations on 160-6 metres on as many modes as possible. Callsign to
be announced, QSL via F5OGL. A log search will be available and
updated on a daily basis at http://glorieuses2008.free.fr [TNX
F6AJA]"

The Elder Statesman of the WVDXA, Bob, W8QHG, recently asked the club if we could help out a new ham who by virtue of a disability had no funds to acquire a transceiver. Bob had met this fellow shortly after he acquired his General Class license and encouraged him to continue on and get his Extra. That he did! But, due his financial circumstances, he was not able to acquire an HF transceiver. So, Bob asked if the WVDXA could help - and help they did! We raised $490 toward the purchase of a transceiver.

In looking on QTH.com last weekend, I found a radio that met our criteria (a built-in antenna tuner, was a relatively recent radio, and was simple enough for a "newbie" to operate.) Even though it was being offered for several dollars more than what we had, I contacted the seller and after hearing about our project, he agreed to absorb the shipping cost and, in fact, he shipped the radio before I even sent him the money!

Here is a photo of the radio operating at my QTH:

The seller also was kind enough to include 100-feet of RG-8X coax with PL-259's already installed. And, he enclosed three extra Amphenol PL-259's for other antennas.

So, now we need to plan an antenna party to install a couple of dipoles for Jerry, W8HIC, so that we can get him operational as soon as possible. Bob, W8QHG, has told him about the radio and says Jerry is "beside himself" that we would do such a thing for him. Good job, WVDXA!