On short notice, the WVDXA gathered together at the Golden Corral restaurant in Cross Lanes, WV, for one of our irregular meetings.  This meeting was to allow the members to view an exciting presentation by Hal, W8HC, on his recent DX'pedition to 3YØZ, Bouvet Island.  Since the date was picked quickly, we were at the mercy of the restaurant as to what times they had available.  The only slot left on Saturday, April 21, 2018, was from 11 a.m to 1 p.m.  But, even with those constrictions, we had a really good attendance.  Nineteen persons signed the attendance list and included: Clark, W8TN, Paul, WV8PR, Tim, K8RRT, Eric, K8OHZ, Marissa Mynes, Seth, W8FG, Charlie, N8RR, Karl, K8KT, Alan, W8OP, Lonny, WA8ZDL, Garry, W8OI, John, WB8CQV, Jonathan Jones, Janice Jones, Steve, WW8RT, Tom, AB8RL, Terry, AA8WZ, Hal, W8HC, and Terry, WV8V.  You can see a few of those attending in the photo at the right.  This was taken during Hal's presentation as everyone was paying apt attention to the screen.  Click on any photo to see a larger image.

The Golden Corral has a very nice meeting room which has doors that can be closed to keep the noise from the rest of the restaurant from being a distraction.  Plus, there are blinds on the outside windows which worked great to keep the sunlight from interfering with Hal's presentation.  A special thanks is due to Becky, KD8IZK, who provided the laptop projector and screen for the presentation.

Upon arriving the members picked their meals from the buffet and we arrived at that time when both breakfast and lunch foods were available.  While eating there was a great deal of interaction between club members.  This is one of the best aspects of the WVDXA meetings.  Lots of good information was shared at this time. 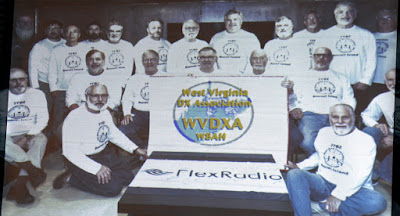 Just after noon, Clark, W8TN, presented the Treasurer's report on behalf of the Club Treasurer, Dave, WA8WV, who was unable to attend.  Once that piece of business was out of the way, he introduced our own internationally recognized WVDXA member and DX'peditioner Extraordinaire, Hal, W8HC!  Hal's presentation included slides and video/audio which detailed the planning and execution of the recent attempt to activate 3YØZ, Bouvet Island.  Bouvet is the second most needed country in the world and this was the most expensive DX'pedition ever mounted with a budget of $750,000.

It was amazing to see the planning, preparation, staging, moving, traveling, training, and just flat-out effort these people engaged in for the sole purpose of activating a rare DX entity.  Hal gave us a peek into the "behind the scenes" activities which most folks are never aware of but which happen on nearly all DX'peditions.  Hal shared his insight and knowledge freely with the WVDXA and his presentation was very informative as well as entertaining.  Hal shared facts with those attending that were not made available to the regular ham community and the very real dangers faced by this group of intrepid DX'ers was staggering.  To travel to a location where there is simply NO OTHER LAND withing 1,000 miles puts you in a very lonely and dangerous place.  Then to have a failure of one of your two engines followed by a failure of the only spare replacement part, leaves a sinking feeling in the hearts of those involved.  The word used most often by members who attended to describe Hal's presentation was "AWESOME" and that is a fact!

Above, on the left, you can see a photo of one of the slides from the presentation which shows the DX'pedition members onboard the M/V Betanzos surrounding a Banner for the WVDXA.  In addition, all the members of the 3YØZ DX'pedition signed the WVDXA Flag and in the photo below, you can see Hal presenting that to WVDXA President, Clark, W8TN.

I expect that those who saw this presentation will be forever changed in how they view DX'pediitons in the future.  For that, the WVDXA gives a very big THANK YOU to Hal, W8HC.