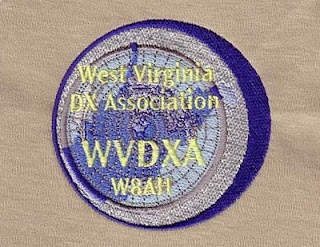 It was discussed at the last WVDXA Club Meeting about having shirts made with the WVDXA logo on them. Jim, K4JWA, has had a sample made and all the guys who saw it at the Dayton Hamvention were extremely pleased with how it looks. You can see a photo of it on the right.

We need to decide what color shirt to place the logo on and what to put under (or over) the logo - such a Callsign Only or Callsign/First Name, etc. So, think about what might make a good shirt color and what you would like to see besides the logo and let's discuss it on the Reflector.

Thanks Jim for taking the lead on this. 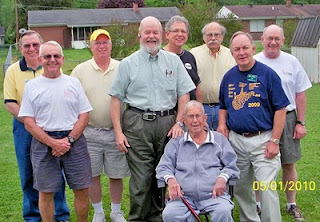 Saturday, May 1st, 9 members of the WVDXA got together at the QTH of Bob, W8QHG, for a most enjoyable afternoon. As Bob is 93-1/2 years young, it is difficult for him to travel so we brought the meeting to him! Alan, W8OP, traveled the furthest in driving 3 hours each way from Fairmont, WV.

Bonnie graciously brought her laptop with an AirCard so we could access the Internet and Hal, W8HC, brought a projector and screen so everyone could see the presentations. First up we had a demonstration of the new WVDXA chat page and the DeskPins utility to keep any window "Always-on-Top" of other windows. Then, I showed the 2007 DX Forum presentation I gave at Jackson's Mill about "How to Work DX on a Dead Band (6-M.) That proved timely as the 6-M band opened up just 2 days later.

Above you can see a photo (taken by Bonnie) of those who attended. Click on the photo to make it larger and then hit your BACK button to return to this page. From left to right are: W8OI, WA8WV, WA8VPN, W8TN, W8HC, W8QHG (seated), N8RR, K4JWA, and W8OP.

Besides the presentations, several who attended were "schooled" by WA8VPN's single QSL DXCC submission. They then went home and began searching their QSL's for Deleted Entities! During "Show and Tell" I gave a brief demonstration of my new climbing belt on Bob's tower. Even with the new belt, climbing a tower with a cane can be difficult!

From all the good comments, we need to get together again before too much time has passed. It was certainly the best Saturday afternoon I've spent in quite some time.