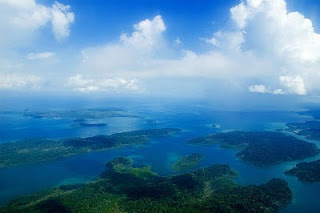 The beam heading for this DX'pedition is 6° and the distance is about 9,000 miles from West Virginia. With that beam heading, signals will need to propagate directly over the North Pole and the Aurora Zone. Therefore, our best chance is probably via Long Path. Andaman ranks as 29th on the 2010 Most Needed Countries List so this will be a big one.

From the list of operatiors I see that Bharathi Prasad, VU2RBI, will be on this DX'pedition like the 2007 VU7RG operation from Lakshadweep Islands. Maybe Papa November will pick up some more recipes for Curried Opossum from her on this trip.

The Kanton 2011 DXpedition is comprised of an international team of 13 operators from five countries. They will be on the air April 17 thru April 28, 2011, running 6 stations on 160M through 6M (SSB/CW/RTTY). You can view their web site HERE. If they are able to access the Internet from Kanton Island, they will upload logs during the DX'pedition and you will find the log search on this page. T31 ranks 28th on the 2010 Most Needed Countries List so this will be a Biggee! T31 is 6,300 miles from WV on a heading of 267° which makes them just about the same distance to the West that TJ9PF is to the East of us. GL to all WVDXA Members who need this one.

Create an Azimuth Map for Your QTH 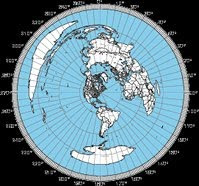 Have you ever wanted a map that shows in a single glance the beam heading to any spot on the earth from your QTH? Well, here is a Web Site that will create just such a map for you. You simply need to enter your location (you can use a City name, a Maidenhead Grid, or your Latitude/Longitude) and then answer a few questions about how you want the map to look. If you choose to leave the "Distance" box empty then you will get the entire world shown on the map like the image to the right here. You can choose shorter distances for VHF work and get maps that show cities within whatever distance you choose. This service is provided as a courtesy by Tom, NS6T, and if you find it useful, there is a link on the bottom of the page where you can make a contribution. Once the map is created (it may take up to 30 seconds) you will get a PDF file that you can save and then print.
TNX to Steve, KØCS, for this tip.

UPDATE:
TNX to Dave, K8MN, for this Web Site which offers a similar way to produce a Great Circle beam heading chart. To utilize this method you download the software to your computer and set the parameters you want.

And, a similar beam heading method is the Beam Heading Chart provided by the North Jersey DX Association and available HERE. Enter your data on this page and it will produce a DXCC Country List with beam headings and distances personalized to your location. This tip was originally published on this WVDXA Blog August 1, 2008, as a tip from Bob, W8QHG, now a SK. You can view that original Post HERE and see a photo of what the beam heading chart looks like.

A group of seven, mostly Spanish hams are heading to Benito Juarez Island (NA-030) - also known as Socorro Island, in the Revilla Gigedo group. They expect to be operational for about 17 days. Plans call for them to take 5 transceivers, 4 amplifiers and one 6-M radio. Antennas are unknown. They hope to have 3 stations operational at the same time and plan operation on all bands and modes from 160-M through 6-M. You can visit their web site HERE and vote for which bands and modes you need XF4. They say they will QSL via LoTW automatically. There is a link at the top of their web site for "LOG" and that is your link for their online log during the operation. Click on the link called "The Island" in the left-hand frame for a lot of good information about Socorro Island. Keep your fingers crossed for some 6-M propagation. TNX to Garie, K8KFJ, for tipping me off to this upcoming DX'pedition.