A group of 5 operators (4 from the USA) will be putting Ogasawara Island on the DX bands for two weeks. They have plans to operate 160 to 6-M with CW, SSB & RTTY. Ogasawara stands at No. 94 on the Most Needed Country List however I'll bet a lot of WVDXA members have many bands they would still like to fill in with this one. This operation will basically be a low-power one from what I read on their Web Page. They will have two Kenwood TS-480's and a Yaesu FT-1021 which is a 200-watt radio. 80 and 160-M they will use verticals, 40 & 30-M will be "half-squaes" and 10-20-M will be a Sigma V five-band vertical dipole and an HB9CV five-band yagi. Working them on the low-bands will present a bit of a challenge due to the lack of high power. But with five operators and three rigs, they should be on the air a good deal. The 7,100 mile, near polar path from WV will also make your QSO's a little difficult but I have high hopes that I can add some more Band/Entities for JD1 beginning next week. There will apparently be an on-line log search as well. GL to all WVDXA members who need JD1.

If you miss out on some JD1 contacts with the above group, JG7PSJ will be operating as JD1BMH from 02 May to 14 May. He WILL have a Yaesu VL-1000 amplifier but has not indicated any plans to operate on 160 or 80-M. He has operated several times from JD1 in recent years and his Web Site indicates he will have an online log search as well.

The Ukrainian DXpeditioners Team (UDXT) has plans to operate from three Pacific DX Entities in June, 2010. They are taking two Elecraft K-3's and two Acom 1010 amps. They plan to be on 160-10-M with CW, SSB & Digital. See their web site HERE. T31 Central Kiribati, Kanton Island, Phoenix Islands Group, is 29th on the Most Needed Country List.

Here are the planned stops on this Odyssey along with Zone and IOTA numbers and proposed dates:

Obviously the 5WØ and ZK3 stops will be short so stay on your toes. 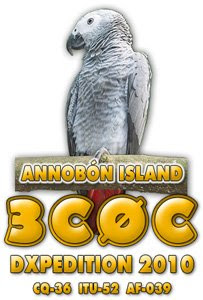 The DX'pedition to Annobon Island, 3CØC, which had originally been scheduled for 15 days in April has been delayed for possibly several months. See their web site HERE. BTW there is a great photo of the island with their proposed location on that web page. Here is the statement describing the delay:

Today we received a statement from Equatorial Guinea where we are told that the coming days, they will start some repairs on the runway on Annobón and therefore can not enter or leave on any flights from the island.

It seems that there is hope that the work will last two to three months. Although we are prepared to leave for Africa at any time, we are forced to delay our stay at Annobón until work on the runway is completed.

They had plans to operate three transceivers with two amplifiers and to be active on 160-10-M. If they delay 2-3 months, it may be very difficult to work them on 160-M.

TNX to Alan, W8OP for this update.

I just voted for what bands/modes I need Iraq on (RTTY plus all bands except 20-M) and I noticed many WVDXA members had also voted. To vote, click on the "Survey" link on their website - YI9PSE. This should be a great DX'pedition to pick up many needed band/mode counters. They are planning to use FIVE complete stations complete with IC-7600 transceivers and Acom amps. Antennas include a 3-L SteppIR, 2-L SteppIR, Force 12 C3S, SteppIR Vertical, 1/4 wave verticals for 30, 40, 80 and 160-M, and a 300-foot Beverage. That's some very workable stations. With Iraq being some 6400 miles from us, it's a little difficult to work but the class of operators and the quality of equipment on this DX'pedition makes it look very good. The website will have an online log and QSL's will be uploaded to LoTW in late 2010. With FIVE complete stations operating all bands from 160 to 10-M (CW, SSB, & RTTY) this should satisfy the demand for Iraq for many folks. GL to all WVDXA members in the pileups.