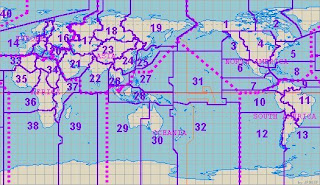 Have you even wondered what ITU Zone you were in? Or, what countries were in CQ Zone 34? Maybe you need to know what Continent for W.A.C. purposes a particular country is in? Or, do you need to know where a particular grid is in the world? Well, CLICK HERE for a great resource to fulfill those needs. All these maps and more are on this one page (be sure you scroll down the page to see all the maps.) And, the maps have "sub pages" so you can click on a Zone and the map will expand and add more data. Click on the CQ Zone map and then click on a Zone and the map will expand to show that Zone and the countries found in that Zone will be listed underneath the map along with the Continent and ITU Zone for that country.  Use your "Back" button to return to the previous page.

In addition to the above map resource (which also has a world-wide Maidenhead Grid Map), CLICK HERE for an interactive Google Map to show Maidenhead Grids around the world. If you know the 4 or 6 digit Grid Square you want (or something close to what you want), just enter it in the "Grid square:" box at the top of the map. If you don't know the Grid Square, just navigate the map by double-clicking again and again on the area of interest and/or dragging the map around. The "Scroll Wheel" on your mouse will also activate the Zoom function. You can then find any location on the surface of the Earth and click on it to see what the Grid Square is. 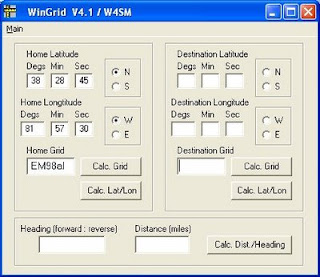 Finally, if you need to compute the beam heading and distance between two locations on the Earth, go to THIS SITE and download "wingrid.exe" by clicking on the heading "New Improved" WinGrid4.0 (wingrid.exe) This will download a small program to your computer which you need to run by clicking on the "wingrid.exe" file. Then, enter the latitude and longitude of your home QTH and press the "Calc.Grid" button to determine your Home Grid. Once you do, pull down "Main" from the Menu Bar and chose "Save Home." Then, everytime you open the program, it will start with your own QTH as the "Home" location. Just enter the other station's grid in the "Destination Grid" box and press Calc. Lat/Lon or "Calc. Dist./Heading" and you will be presented with the beam heading (both direct and reverse) and the distance between you and the other station. Also, double-clicking anywhere inside the borders of WinGrid will change the input fields from "Degrees-Minutes-Seconds" to "Degrees" and decimal portions of a degree.

WinGrid does not install itself as a "Program" on your computer. It is just an "excutable file" that you have to start by clicking (or double-clicking) on the WinGrid.exe file wherever you downloaded it. You can easily place a "Shortcut" on your desktop to the WinGrid executable file so that you can find it easily to start the program as you will use it often.

Today the Rig/Antenna donation project which was begun by Bob, W8QHG, was brought to fruition. Braving the heat and humidity, 6 WVDXA members converged on Jerry, W8HIC's, QTH and in short order installed a Hy-Gain DX-88 vertical with 15 radials. On the right you can see the Antenna Crew - left to right, Tim, KC8UHE, Pete, K4OM, Bob, W8QHG, Charlie, N8RR, Jerry, W8HIC, Garry, W8OI, and Clark, W8TN. You can click on the photo to see a larger image.

The operation was nearly scratched due to an anto accident which took out power to Jerry's QTH. But, in the usual WVDXA manner, we pressed on and by the time the antenna was installed, the power had been restored. After the antenna (donated by Phil, W8UV) was erected, Charlie, N8RR, pronounced it to be nearly perfect according to the MFJ-259B. 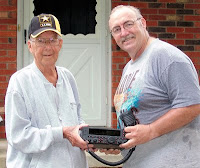 At that point we moved to the front of Jerry's QTH and The Elder Statesman of the WVDXA, Bob, W8QHG, presented Jerry with the Yaesu FT-450-AT which was acquired through the generous donations of many members of the WVDXA. The radio was purchased from Al, K9XR, who, upon hearing what we planned to do with the radio, graciously donated the shipping costs and included 100-feet of RG-8X with connectors (which was used to connect the vertical to the Yaesu.) That is a true indication of "Ham Spirit." And Rick, W8ZT, donated the Kenwood PS-40 power supply to the project and others added various and sundry items needed for the installation. 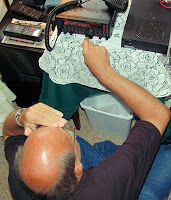 At this point we moved inside and thankfully the power had been restored and Jerry's air conditioning was functioning. The heat and humidity outside had taken a toll on some of the more robust members of the WVDXA (W8TN) even though ice water and Gatorade was available! Once in Jerry's shack it was a simple matter to connect the coax and the power supply. On the right you can see Charlie, N8RR, peering through the glare to adjust the radio. We quickly made a couple of contacts to confirm the system was fully functional and upon leaving, found the raindrops just starting! As they say, timing is everything.

This project was suggested to the WVDXA by Bob, W8QHG, back in February. It took some time to gather the donations both of cash and materials, locate a suitable rig, and schedule this antenna party. However, through it all, the members of the WVDXA have stood firm and pulled together to complete something that is seldom seen today. This out-pouring of generosity is a hallmark of those who belong to the WVDXA and something which all of us can be proud. I sincerely thank all who helped in whatever way, no matter how small or large your contribution. You can be proud that you helped us set up a new DX'er with a great first station.

Jerry will surely need more help in learning the ropes as time goes on. I have encouraged him to join the WVDXA Reflector and present any questions he may have to the group or to any indivitual member. I am certain he will be welcomed into the WVDXA with gusto! Jerry's photo has been added to the WVDXA Members Photo Gallery on this blog and it should show up soon. Congratulations Jerry and we all hope you work lots of DX with your new station.

FT/G, GLORIOSO ISLAND (Update). Didier, F5OGL, Glorioso 2009 team leader,
announced this past week that the Glorioso 2009 team gathered at Frank's,
F4AJQ, QTH last weekend (June 6-7th), with some F6KOP team members. During
these two days the whole time was spent tuning the antennas, teaching
DXpeditioners about their settings, and to coordinating all of the packages.
The final setup was 4 complete stations (each with at least a 800 watts PA)
that will be shipped to Glorioso's main island. They plan to be active
as much as possible during the 24 hour day. Their antenna system will
consist of 2 Spiderbeams for 20/15/10m and another for 30/17/12m. They
will also have an Inverted L for 160m, one V10, one V80 and one HF2V
for 80-40m. Some other vertical elements were packed as well as a K9AY
array receiving system. A 6 meters station will monitor the Magic band
but only into a G5RV antenna. The complete crew (and they hope it will
not change) consists of: Freddy/F5IRO, Yves/F5PRU, Jean-Marc/F5RQQ,
Sylvain/F5TLN, Philippe/F4EGS and three SIRPA agents: Florence (YL)
journalist, Yann (director and cameraman) and Didier (cameraman and
sound engineer). They would like to thank Jeff/F6AOJ, Floyd/N5FG, Toshi/
JA1ELY, Mike/UA0ME and Lee/ZL2AL for being their pilot stations. It was
mentioned that they would also like to thank Floyd/N5FG and Jeff/F6AOJ
for their big efforts in the back office. For the first time the callsign
to be used for the Glorioso operation will be under the new French
Antarctic and Austral Territories (TAAF) regulation and is expected to
be FT5GA."
ADDED NOTE: As of 2005, the "Iles Eparses", Gloriosos, Tromelin, Juan da
Nova and Europa Islands are now put under the new TAAF authority. All
future callsigns, for these areas, will be issued with the following
prefixes:
FR/G becomes FT#G Gloriosos FR/T becomes FT#T, Tromelin
FR/E becomes Ft#E, Europa FR/J becomes FT#J, Juan da Nova