Who would have guessed that we could have a wonderful get together at the home of Jim, Mary and Hunter Adams?  Well, we did - AGAIN!  This meeting was scheduled on Sunday due to the fact that Jim, K4JWA, was working all available Saturdays.  With a nominal start time of 1 p.m., folks started arriving before 12:30 p.m. obviously anxious to take advantage of the camaraderie that always exists at these events.  When I arrived, Hunter, KD8SZF, met me in the driveway and directed me on where to park plus he carried in my items for the SwapFest.  The Adams' home was ready for the influx of hungry hams with tables set up, a laptop/projector/screen ready to go, and even the Christmas Tree was decorated.

Note that in the photo above, you can see our Brand New WVDXA Flag!  I was not scheduled to receive this flag until this coming Tuesday but it showed up late Saturday afternoon.  As produced, the flag only had 2 grommets so Evelyn quickly sewed a couple of backing strips to the corners without grommets and my grandsons, Owen & Grant, installed new grommets at those corners.  At the meeting, we presented the flag to Hal, W8HC, who will be one of the team on the 3YØZ DX'pedition to Bouvet Island.  He will take the flag to Bouvet where it will be hung in one of the tents and later signed by the team members!

We had three presentations at the meeting.  First, Hal, W8HC, showed a video of a helicopter circling Bouvet Island.  This video was just shot just a couple of months ago.  Team SubICE was there drilling the first ever ice core on Bouvet Island, as part of the Antarctic Circumnavigation Expedition (ACE.)  Here is the link to to that 6-minute video on YouTube:   https://www.youtube.com/watch?v=zirAkuCK8Jw 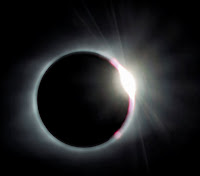 Next, Karl, K8KT, and Clark, W8TN, gave a PowerPoint presentation on their trip to Sweetwater, TN, back in August to view the Total Solar Eclipse.  Karl showed a printed photograph of the "Diamond Ring" photo they captured.  See that photo on the right.

Last but not least, WVDXA member, John, W4ER, came from Mobile, AL, and gave a presentation on QRP/Portable operation.  John had a PowerPoint slide show with photos showing several of the places he has operated (43 states and, I think, 8 countries!)  He also brought a half dozen QRP radios that he has used over years and after showing them and describing their features, he passed them around for all to have a "Hands On" experience.  John is Jimmy, W8JA's, brother so with his visit here he was also able to bring their mom, Oleta, so she could be part of our meeting.

Below is the "No Dues" DUES REPORT submitted by the WVDXA Treasurer, Dave, WA8WV, who was not able to attend because of a cold:


Since starting this great group in 2003 we have collected $1800.00 more or less. Thought I would give you an idea of what our "NO DUES" DUES have covered:

At today's meeting we collected $50 in donations to the WVDXA Club Treasury bringing the current balance up to $220.01 total.  Eight donations were also collected for the K1B (Baker and Howland Islands KH1) DX-pedition.  Roger, KD8BZY, who is collecting those donations was not able to attend so those donations will be forwarded to him.

After the presentations, a door prize drawing was held with W8OM and KD8IPW being the winners!  The door prizes were donated by Tim, K8RRT, who was unable to attend today's meeting because of work.

Finally, the SwapFest met with some success.  Jim, K4JWA, sold a few items (I bought some heatshrink and Evelyn bought a desktop organizer), plus I sold my West Mountain Speakers.  I'm not sure what other transactions may have taken place at the SwapFest but those who did buy or sell something should forward the appropriate "selling" and "buying" fees to Jim, K4JWA.  Yeah, I'm sure ya'll will do that, right?

From the comments that were posted on the WVDXA email reflector after the meeting, I think pretty much everyone had a FABULOUS time - as we always do.  This is such a great group to belong to that we should get some kind of award don't you think?