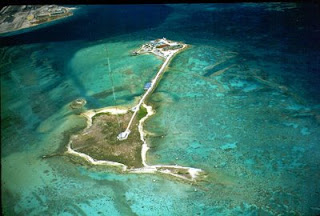 Susan Meckley, Skipper of the USSV Dharma, and amateur radio operator, W7KFI, has been authorized to operate from Johnston Island, KH3, (see photo at Left.) This may very well be the LAST operation from there. Susan has been told that the Air Force and the Fish and Wildlife Service are declaring Johnston Island a "closed" island. It took her 7 months to acquire permission to make a stop there. Note, Susan is a 73-year old Grandmother!

Susan has had many troubles in her effort to reach Johnston Island - the engine on her boat quit, she had to return to Hawaii for emergency oral surgery, and, always at the mercy of the weather, had to lay over in Hawaii for the Hurricane season. But, just last week, Alan, W8OP, received an email from Susan stating that she hopes to head out before the end of the summer. Here is Susan's email:

I rec'd your nice letter, thank you. Yes, according to the powers that be, I am the last "officially approved" landing on KH3. The island is a nature preserve and is now "closed", much like Howland, Baker, Kure, Swan, etc. The only priviso from the Govt was that I take everything with me, leave nothing, and stay out of the water, the army galley used to dump their garbage in the water, thus th shark population is horrendous. I have a rule, I don't east raw fish, they (Hopefully) dont eat raw me.

I now have $5,000 saved for the engine change out....another thousand and the work begins, so I hope to be out of Honolulu before the summer is over. When I do leave, I will notify everyone...the trip there should take me a week, and then a day or so to set up. I have purchased an additional 27.5 gal water tank, so I should be able to remain at least a week, that is , if there is no rain. With rain, I stay longer.

Again, thank you very much.

If you don't change direction you will arrive exactly where you're headed!!
Susan Meckley, Skipper - USSV Dharma

Let's hope she is able to make a safe voyage and work all WVDXA Members who need KH3.

HERE is a link where you can see a photo of Susan and listen to a conversation she had with radio host, Art Bell, while she was 200 miles off the coast of Hawaii. 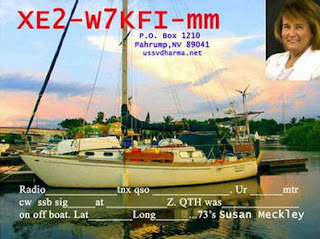 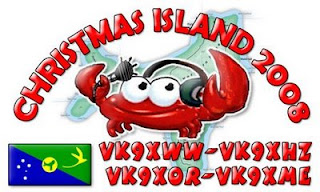 With temperatures in the 90's some days the phrase "Christmas in July" sure sounds good to me. In this case, I'm referring to the upcoming DX'pedition to Christmas Island.
According to their WEB SITE, the operation will now take place from July 14 to 21 because of a change in air transportation. Equipment consists of a Kenwood TS-480SAT, Yaesu FT-857, Alinco DX-70T, and an Acom 1010 amplifier. Antennas are a Spiderbeam and a Force 12 XK40 vertical. Modes planned are CW, SSB, RTTY, SSTV, PSK31 and FM on all bands from 80 thru 6 meters (possibly they will operate on 160-M but that is not considered too likely.) But, they plan to run THREE stations (1 high power and 2 at 100-watts.) Their goal is to give as many folks as possible a chance for a QSO for a New One. Christmas Island ranks No. 66 on the Worldwide Needed List.
Check out their web site. It is very extensive. GL to all.