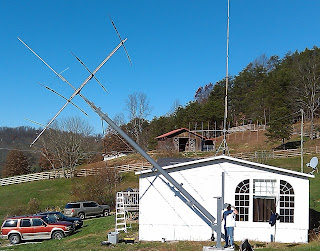 On Friday, November 18, I had agreed to help Tim, K8RRT, and Dana, K8WAT, put the final touches on the installation of Dana's new "tower" and HF yagi.  First, Tim and I met at Tudor's to fuel up at about 9:30 a.m. and to wait for it to warm up a bit above the low 30's!  When we got to Dana's QTH I found that Dana had done a really professional job of installing his Wilson ST-77 telescoping, tilt-over tubular tower.  This involved a lot of work by Dana, Tim and Dwight, W8WDT, over several weeks.  The concrete base was massive - as was the tower itself!  What we needed to do today was to attach the antennas to the tower and crank it up.

First we checked all the measurements on the HF antenna which is a Hy-Gain TH-5MK2.  This is a broadband yagi on a 19-foot boom designed for operation on 10, 15, and 20-M.  It has two fully trapped driven elements which result in a good SWR across the entire band.  No need to set up the antenna for CW, mid-band, or Phone operation.  All the measurements checked perfectly except for one on the reflector which was exactly 1 inch longer on each side.  We decided the previous owner must have had a reason to do that and since we could easily crank it down if it wasn't right, we left it alone. 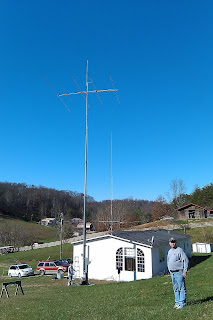 Next we cranked over the tower and our "Safety Officer" (K8RRT) kept yelling at me to stay out from underneath this mass of steel.  We had no problems at all (for which I am very glad.)  Tim was adamant about keeping us all safe and that's a good thing!  In the photo at the left you can see the relative size of this monster behind Dana and Tim (click on any photo to make it larger.)

Once we had the tower where we could reach the mast, we installed the UHF/VHF vertical, a Jetstream JTB-4, which will cover 6-M, 2-M and 440.  Then we mounted the TH-5MK2.  At this point, Tim, K8RRT, checked out the antenna with his MFJ-259B and declared that the SWR was dang near perfect on all bands.  Once that was done, it was time to "Crank It Up!"  Both Dana and Tim expressed how nice it would be to have a motor to do that job!

Once the tower was vertical and locked in place, Dana raised it to about 50-feet.  The tower will extend to 70-feet but he decided to check it out at this level first.  Finally, we installed a coax connector on the UHF/VHF feedline and re-did the wiring on the rotor control cable.  Once that was done, it was time to calibrate the rotor and put some "fire in the wire."  The SWR was indeed great and signals were coming in from all over the world.

For quite some time Dana had been using the 40-M vertical you see mounted on the small roof tower for all his DX'ing on several bands.  He was stunned to find how well he could null out the QRM off the sides and back of this new antenna.  It was even better than he remembered his quad's performance a few years ago.  So, we now have another WVDXA member with a new or improved antenna system ready to pounce on the elusive DX.  In fact, Dana has been doing that nearly non-stop since the antenna went up!  He has even worked a couple of all-time New Ones already.  So when you hear that big signal in the pileup signing K8WAT, you will know where it comes from.  That is probably the "cleanest" looking HF installation I've ever seen.

NOTE:  Before I could get the above Posted, Tim called to tell me that Dana worked 9N7MD on 20-M SSB tonight!  WHEEE!  Let the DX'ing begin!